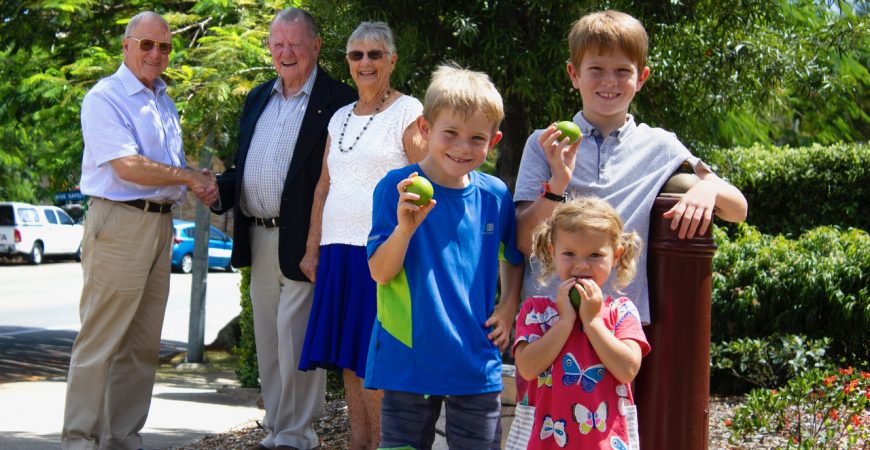 After the launch of its new fundraising initiative during Australia Day celebrations, the Buderim Foundation has revealed the 2018 Community Challenge was a huge success, with more than $400,000 raised for the local community through various fundraising activities and donor contributions in just 12 months.
Buderim Foundation Chair Dr Russell Stitz said a total of $433,000 was raised by the popular philanthropy group in 2018, comprising contributions from 7 local businesses, three community groups, two bequest, nine events and 68 individual contributions.
“We are absolutely delighted with the result of last year’s Community Challenge,” Dr Stitz said.
“All contributions are important, but what’s really exciting is the cross-section of the community who made individual donations.
“While the bulk of these were in the range of $500 to $10,000, there was the extraordinary $200,000 donation from the Thompson Family all the way down to a $23.50 donation made by the young Wood boys who raised money last Australia Day selling limes grown from a tree in their back yard.

“We are so grateful for these donations, however small or large, and they’re a great example of what we’re trying to achieve with the Buderim Foundation – the idea of life-long philanthropy.”

In addition to these donor contributions, the Foundation relies on a veritable army of volunteer Ambassadors working behind the scenes in the areas of marketing, events, donor development, grants, youth development, policy and investment.

Operating under a money in – money managed – money out model, the local philanthropy group set a goal in 2018 of raising enough funds to bring the total balance of their Foundation Fund to $2 million.
With last year’s fundraising efforts the Fund now stands at a very healthy $1.85 million (despite the volatile sharemarket currently) , Dr Stitz said income wise 2018 was the best in the Foundation’s 14 year history.
“The larger the Foundation Fund, the more money can be invested, in turn generating income returned back into the community via the Foundation’s Community Grants Program,” he said.
“Last year alone, more than $75,000 in grants was awarded to 23 community groups in or benefitting residents in the 4556 postcode, including The Compass Institute, Chancellor State College P&C Association, Story Dogs and the Buderim branch of the Scouts.
“As the total funds and annual grants grow, our supporters are becoming increasingly aware of the power of the community foundation concept with every dollar continuing to work for ever.”

Along with the Foundation’s Regular Giving Program launched last month, fundraising activities vary throughout the year and have so far included initiatives such as movie nights, art raffles, music concerts, networking events, as well as personal bequests and donations.
The Buderim Foundation is generously supported throughout the year by Buderim Pharmacy, Edenlea and Sunshine Toyota, who cover annual operational costs.