Enjoy an evening with an outback Aussie icon! 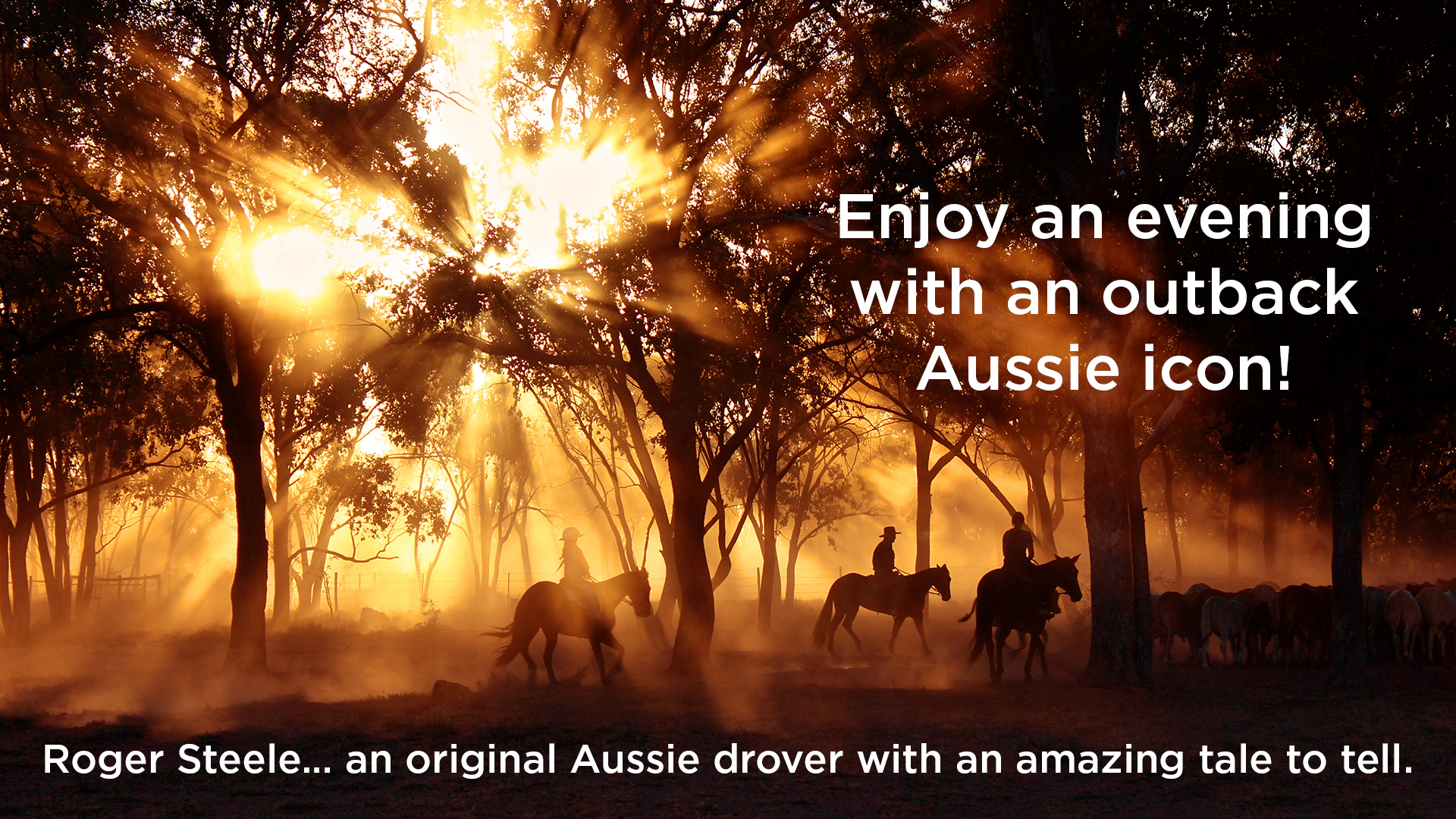 Roger Steele is an original Aussie drover with an amazing tale to tell.

Roger was sent outback six weeks after his 13th birthday in 1952 to start work at Humbert River Station in the Northern Territory. He was taught to ride and, not long after, joined the Humbert team on a four-week droving trip to the Wyndham meatworks in Western Australia… a journey he repeated in 1954 and 1955.

At age 16, Roger moved to a large station on the Barkly Tableland… the start of years of working on vast properties and experiencing many droving challenges.

While riding the Barkly Tablelands stock route, he was left to manage 1,100 drought affected cattle eager to get to the river to drink and, on another occasion, he spent 16 weeks droving 1,350 bullocks… as he said, not an easy challenge.

But it wasn’t all about cattle, as camp cook, Roger has memories of carrying bread dough from one camp to the next in his packhorse’s saddlebag; getting the campfire lit and baking the next batch before the hungry droving crew arrived.

In total Roger spent 17 years in the pastoral outback and worked his way up from ringer, drover, camp cook, head stockman, to station manager.  He believes this outback experience was the most memorable and fulfilling period of his life.

In 1974 Roger joined the Country Liberal Party (CLP); became the member for Ludmilla in Darwin and from 1978 until 1983, he was a Minister in the NT Government.

In 1988 he became the NT Assistant Commissioner of World Expo ‘88 and in 1989 he became the Chief Executive of the Australian Stockman’s Hall of Fame which gave him the opportunity to highlight the importance of women in the outback and the contribution of Aboriginal pastoral workers.

Roger considers one of his most satisfying political achievements to be the establishment of the Gregory National Park (now known as Judbarra/Gregory National Park), a 12,882 square kilometre national park in the Victoria River country of the Northern Territory.

Roger Steele was awarded the Order of Australia in January 2020.

To purchase tickets email Susi Du Toit
at: info@buderimfoundation.org.au
or phone 0474 220 895
or for online booking: https://www.trybooking.com/CEVQZ