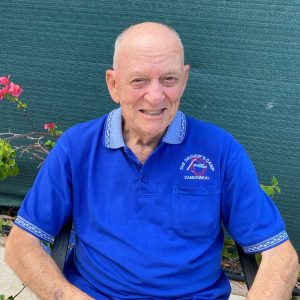 An original Aussie drover Roger Steele will be telling stories from his extraordinary years in the outback at a special Buderim Foundation evening on Friday 3rd February.

Mr Steele, who began work as a 13-year-old on a Northern Territory cattle property and spent 17-years in the pastoral outback working his way up from ringer, drover, camp cook, and head stockman to station manager before becoming a Northern Territory Government Minister and Assistant Commissioner for World Expo ’88, has had an incredible life.

Buderim Foundation chair Rod McKinnon said it was not a surprise that with such an interesting working life, Roger has some incredible tales to tell.

“Whether outback life is completely different to your own experience or whether you have some fond memories of your own, Roger will paint a picture of outback life including the challenges of droving cattle for thousands of kilometres in often hazardous conditions, so we can’t wait for our Drover’s evening,” Rod McKinnon said.

Roger was sent outback six weeks after his 13th birthday in 1952 to start work at Humbert River Station in the Northern Territory. He was taught to ride and, not long after, joined the Humbert team on a four-week droving trip to the Wyndham meat works in Western Australia… a journey he repeated in 1954 and 1955.

That was the start of 17 years of working on vast properties and experiencing many outback challenges including drought, a period be believes was the most memorable and fulfilling period of his life.

In 1974 Roger joined the Country Liberal Party, became the member for Ludmilla in Darwin and from 1978 until 1983, he was a Minister in the NT Government. In 1988 he became the NT Assistant Commissioner of World Expo ‘88 and in 1989 he became the Chief Executive of the Australian Stockman’s Hall of Fame which gave him the opportunity to highlight the importance of women in the outback and the contribution of Aboriginal pastoral workers. Roger Steele was also awarded the Order of Australia in January 2020.

The Buderim Foundation Drover’s Evening with Roger Steele will be held at the Buderim War Memorial Hall on Friday 3rd February 2023, with arrivals from 4.30pm for a 5pm start, with tickets available for $30 per person including ‘outback nibbles’ as well as music from local Ken O’Flaherty. There will also be a cash/EFTPOS bar available on the night. Tickets are limited and expected to sell out. To purchase tickets, visit https://www.buderimfoundation.org.au/events/ or email Susi Du Toit at info@buderimfoundation.org.au or phone 0474 220 895.

Profits, after Foundation administration costs are covered, will be transferred to the Buderim Foundation Open Trust where the income earned is distributed annually as community grants.